Shedding light on sleep: discovering new players in the brain

We spend about one-third of our lives asleep, but much is still unknown about how this nightly occurrence is regulated by the brain. In a pair of two new papers, Professor of Neurobiology Yang Dan and her lab have identified new neurons, circuits, and brain areas involved in regulating sleep, opening the door to a better understanding of this state that is critical to our functioning and health.

For a long time, scientists have focused primarily on one brain area known to promote sleep  — the preoptic area (POA) of the hypothalamus — to study how sleep is controlled. But recently, Dan’s lab and other groups began finding neurons outside of the POA that also promote sleep.

“All of a sudden, it seems like they’re all over the place,” Dan says. “So how many more are out there? If you rely on accidentally stumbling on to one after another, it’s not very satisfactory. So we decided to do a systematic screening.” 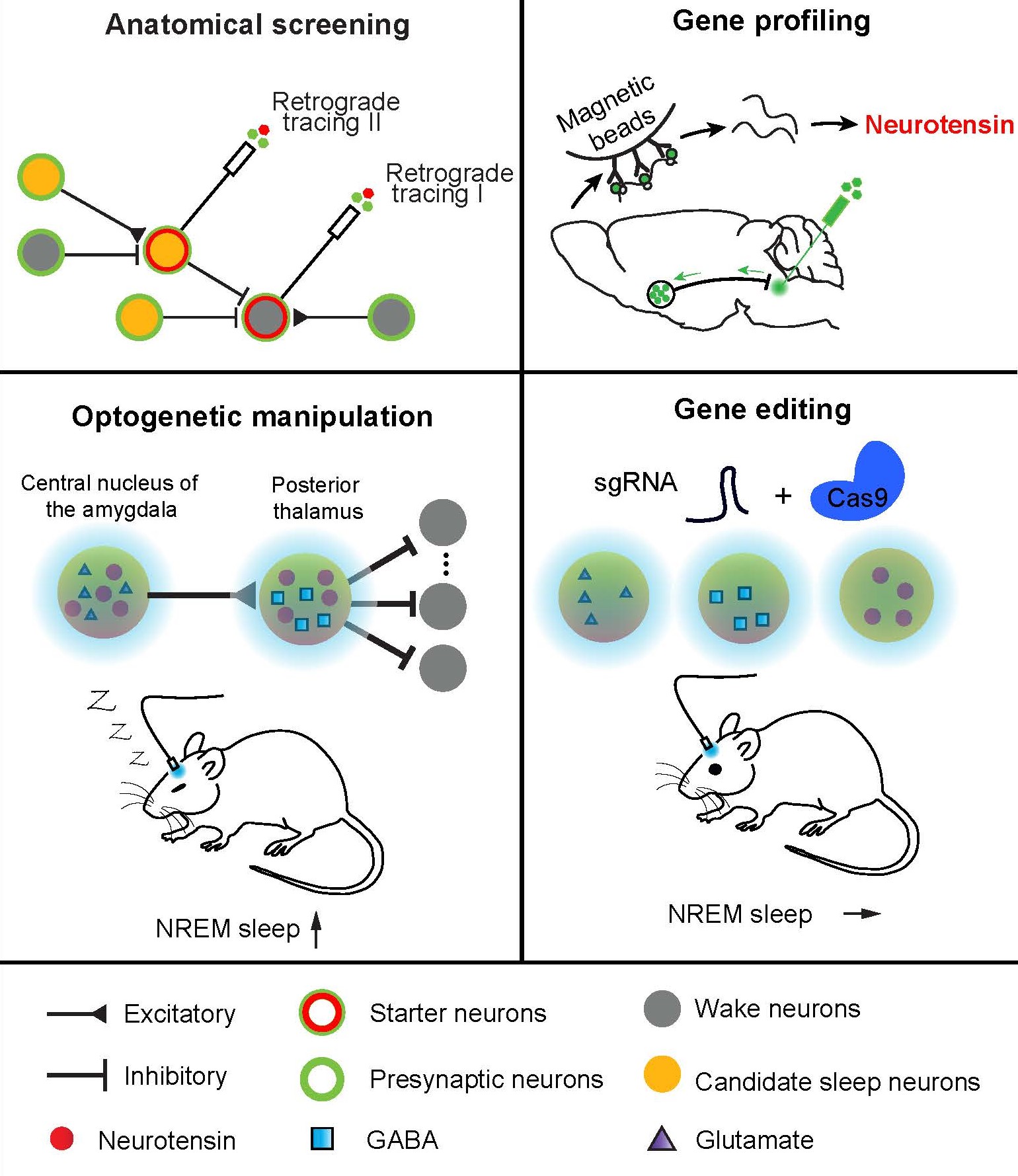 A summary of the methods and results of the Ma et al. study. Image by Chenyan Ma.

Dan’s lab screened for new areas involved in sleep in two complementary ways: by looking for neurons that are more active during sleep (sleep-active neurons), and by looking for neurons that promote sleep (sleep-promoting neurons). The results of the first study, led by postdocs Zhe Zhang and Peng Zhong, were published in Cell in May and the results of the second, led by postdoc Chenyan Ma, were published in Neuron in July. Neuroscience PhD Program student Zeke Barger is one of the authors on both publications.

In the first study, by Zhang et al., they used a recently developed method called TRAP (targeted recombination in active populations) to label sleep-active neurons in mice. The mice were engineered to express a fluorescent marker in active neurons, but only when injected with the drug tamoxifen. By injecting tamoxifen when the mice were sleeping, Dan’s team could identify neurons throughout the brain that were active during sleep.

The technique identified not only the usual suspects involved in sleep, such as the POA, but several new areas with higher activity in sleeping mice compared to awake mice. One region in particular, the perioculomotor (pIII) region of the midbrain, stood out because of its particularly high level of activity during sleep.

“This area was actually quite surprising to us,” Dan says. However, when Zhang began researching the literature on the pIII, she found that this area was postulated to be a sleep center by Ludwig Mauthner back in the 1890s — and then was largely forgotten as sleep research began to focus on the POA.

“Then I was really, really excited,” Dan says about Zhang’s discovery. The team began focusing on the pIII, characterizing and testing the sleep-active neurons. They found two populations of sleep-active neurons in pIII — expressing the peptides CALCA and CCK, respectively — that were particularly active during non-REM (NREM) sleep. This was confirmed using a technique called optrode recording that allows recording of neural activity in specific subsets of neurons. The researchers then used multiple methods to experimentally activate or inactivate the CALCA and CCK neurons, and found that activation promoted NREM sleep and inactivation inhibited it, further supporting the idea that these neurons normally act to promote sleep.

“Most of the previously discovered sleep neurons are GABAergic [expressing the inhibitory neurotransmitter GABA] which is why a lot of the sleeping pills target the GABAergic system,” Dan says. The GABAergic cells, largely in the POA, are generally thought to promote sleep by inhibiting neurons that promote wakefulness. But the pIII cells are different.

“One thing that’s really exciting about these cells is that they’re actually glutamatergic, they release glutamate, which is an excitatory neurotransmitter,” Dan says. Her group found that this newly discovered excitatory sleep center connects to and activates the POA, which could be one way that it promotes sleep. Also, the CALCA and CCK neurons reciprocally activate each other, possibly acting to reinforce and sustain the state of NREM sleep.

In the second study, by Ma et al., the researchers screened for additional sleep-promoting areas using a different approach — working backwards from neurons known to promote wakefulness (wake neurons) to see which neurons connect to and inhibit them, causing sleep. Ma did this by delivering tracers to several populations of wake neurons, which traveled backwards across synapses to reveal some of the neural circuitry that provides input to these cells.

“She was looking for brain areas that don’t just inhibit one of these populations, but inhibit as many as possible,” Dan explains. “What she found was that our top contender is actually the central nucleus of the amygdala which, again, came as a huge surprise.” This is because the amygdala is perhaps best known for its role in fear and some other emotions and behaviors, “but not much is known about its function in sleep,” according to Dan.

To learn more about these new sleep-promoting neurons in the amygdala, they performed gene profiling experiments and found that the cells highly expressed the peptide neurotensin. Like the neurons in pIII, they also promoted NREM sleep, although in this case they were GABAergic, promoting sleep by inhibiting wakefulness.

Then the researchers delivered tracers to the sleep-promoting neurons in the amygdala, working further backwards in the circuit to find out which neurons were activating them. They discovered a population of glutamatergic NREM sleep-promoting neurons in the posterior thalamus that were exciting the amygdala cells. Interestingly, the sleep neurons in the thalamus expressed neurotensin, just like those in the amygdala. When they used the gene-editing technique CRISPR to decrease neurotensin in either the inhibitory amygdala neurons or the excitatory thalamic neurons “the effect of these neurons in promoting sleep is greatly reduced,” Dan says. “So that suggests it’s not just glutamate or GABA, the traditional transmitters. The peptide itself [neurotensin] is also quite important for the function.”

Together, these studies reveal new molecules, cells, and brain areas involved in sleep regulation, providing fertile ground for further research into the mysteries of sleep. Besides its role in health, Dan is fascinated by sleep as a way to better understand the brain in general.

“This whole brain state change is huge,” she says of sleep. “It’s really dramatic and you can see it right in front of your eyes — you can see it in the EEG, EMG, and so forth…That’s what got me thinking about sleep, because the biggest state change is sleep versus wakefulness.” By casting a wide net to screen for new brain regions involved in sleep, Dan’s lab is helping to reveal the broad network underlying this dramatic change in brain activity that happens every night as we, seemingly simply, drift off to sleep.