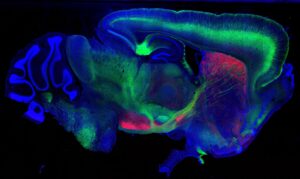 Mouse brain section showing (green) cortical neurons and their projections to subcortical structures including the striatum, (red) striatal direct pathway neurons and their projections to the output structures of the basal ganglia, and (blue) cell nuclei. This study showed that cortical synaptic inputs onto striatal direct pathway neurons are hyperactive in mice with a mutation in the Tsc1 gene. Image courtesy of Helen Bateup.

People with the neurodevelopmental disorder tuberous sclerosis complex (TSC) often also have autism spectrum disorder (ASD). TSC is caused by mutations in the genes TSC1 or TSC2 in humans. In a new paper, researchers from Helen Bateup’s lab report that selectively deleting the Tsc1 gene in a specific population of neurons increases motor routine learning in mice. They found that this effect is due to increased excitation in this neural pathway, due to changes in the synapses between neurons. These findings could aid in understanding the restricted, repetitive behaviors that are a common characteristic of ASD.

Bateup is an associate professor of neurobiology and member of the Helen Wills Neuroscience Institute at UC Berkeley. The study, which was published on August 10 in Cell Reports, was co-led by Berkeley Neuroscience PhD student Katherine Cording and MCB PhD alum Katelyn Benthall.

This work was supported by a SFARI Pilot Award (307866), R21 NS096415, R56 MH111821, and R01 NS105634 grants to Helen Bateup. Bateup is a Chan Zuckerberg Biohub Investigator and was supported by an Alfred P. Sloan Foundation fellowship. Benthall was supported by an NSF graduate research fellowship (DGE 1106400). Confocal imaging was conducted, in part, at the CRL Molecular Imaging Center, supported by the Helen Wills Neuroscience Institute and NSF DBI-1041078.