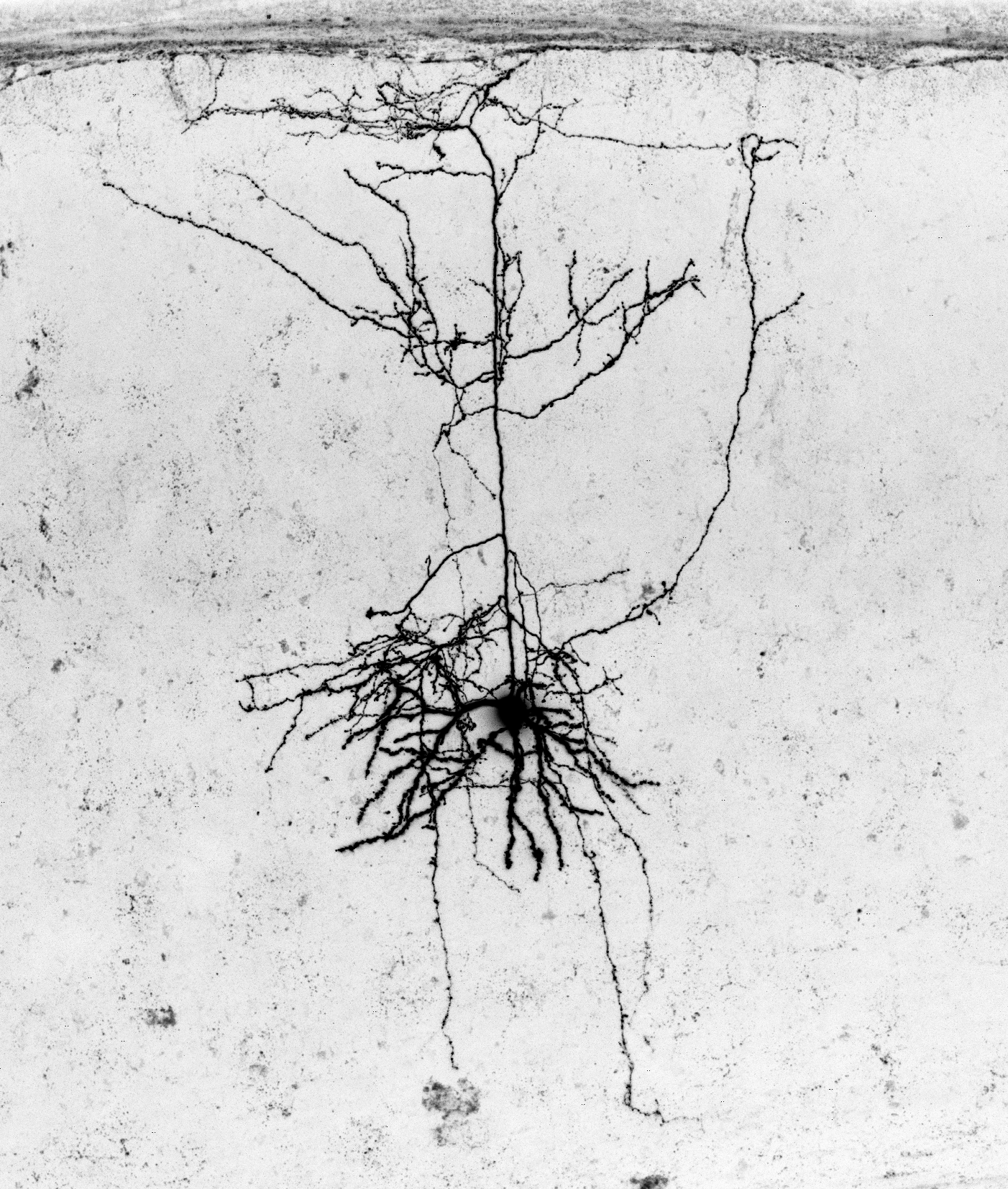 Image of a Martinotti cell filled with dye, courtesy of Alex Naka.

In order to interpret the world around us, our cerebral cortex integrates “bottom-up” information from our sensory organs with “top-down” information from other areas of the brain. In a new study, the Berkeley Neuroscience labs of Hillel Adesnik and John Ngai have identified two subsets of neurons that express the same neurotransmitter, somatostatin, but function in different subnetworks related to either bottom-up or top-down processing in the somatosensory cortex.

The study, published in eLife, was the result of extensive collaboration between researchers with different areas of expertise — from optogenetic control of neural activity to mapping of neural circuits. In addition to Adesnik and Ngai, other members of the Berkeley Neuroscience community that contributed to the paper were first author Alex Naka (2018 PhD Program graduate), Ben Shababo (PhD Program student), and Julia Veit (a former postdoctoral fellow).

Naka, now a postdoc at Genentech, explains the research and its significance in the following Q&A.

What was this study about and what were your general conclusions?

Alex Naka: This study was focused on two different types of [somatostatin-expressing] inhibitory neurons, called “Martinotti cells” and “non-Martinotti cells”. Our goal was to understand the differences between these two neuron types and how they each contribute to the processing of sensory information. We used a variety of circuit-mapping techniques to figure out how each type connects to other nearby neurons. We found that Martinotti cells and non-Martinotti cells connect to almost completely different sets of neurons. In other words, each neuron type belongs to its own subnetwork. This was really surprising to us, since people have often found that inhibitory neurons lack this kind of specific connectivity.

We then used optogenetics to activate either Martinotti or non-Martinotti cells while recording activity in the brain of an awake mouse. We saw that these two neuron types exerted distinct effects on surrounding brain networks that corresponded to their unique connectivity patterns. This indicated to us that these neurons probably have different computational roles in sensory processing. Finally, we profiled the gene expression of these neurons to get a look at the possible molecular mechanisms that underlie their differences.

What was novel about your approach, or how did this particular approach allow you to gain insight into the question?

AN: We were able to bring a wide variety of techniques to bear on this problem, which allowed us to draw a pretty comprehensive picture of the neurons we were studying. I’m very fortunate to have been able to collaborate with a ton of incredibly talented scientists on this project. Julia Veit (now a group leader in Germany) did all of the in vivo optogenetic experiments. Ben Shababo led a collaborative effort with Liam Paninski’s group to acquire and analyze data using a cutting edge new holographic circuit mapping approach. And finally, David Stafford and Rebecca Chance (from John Ngai’s lab) as well as Davide Risso put together a fantastic transcriptomic dataset. This project simply would not have been possible without the diverse expertise of all these different people. 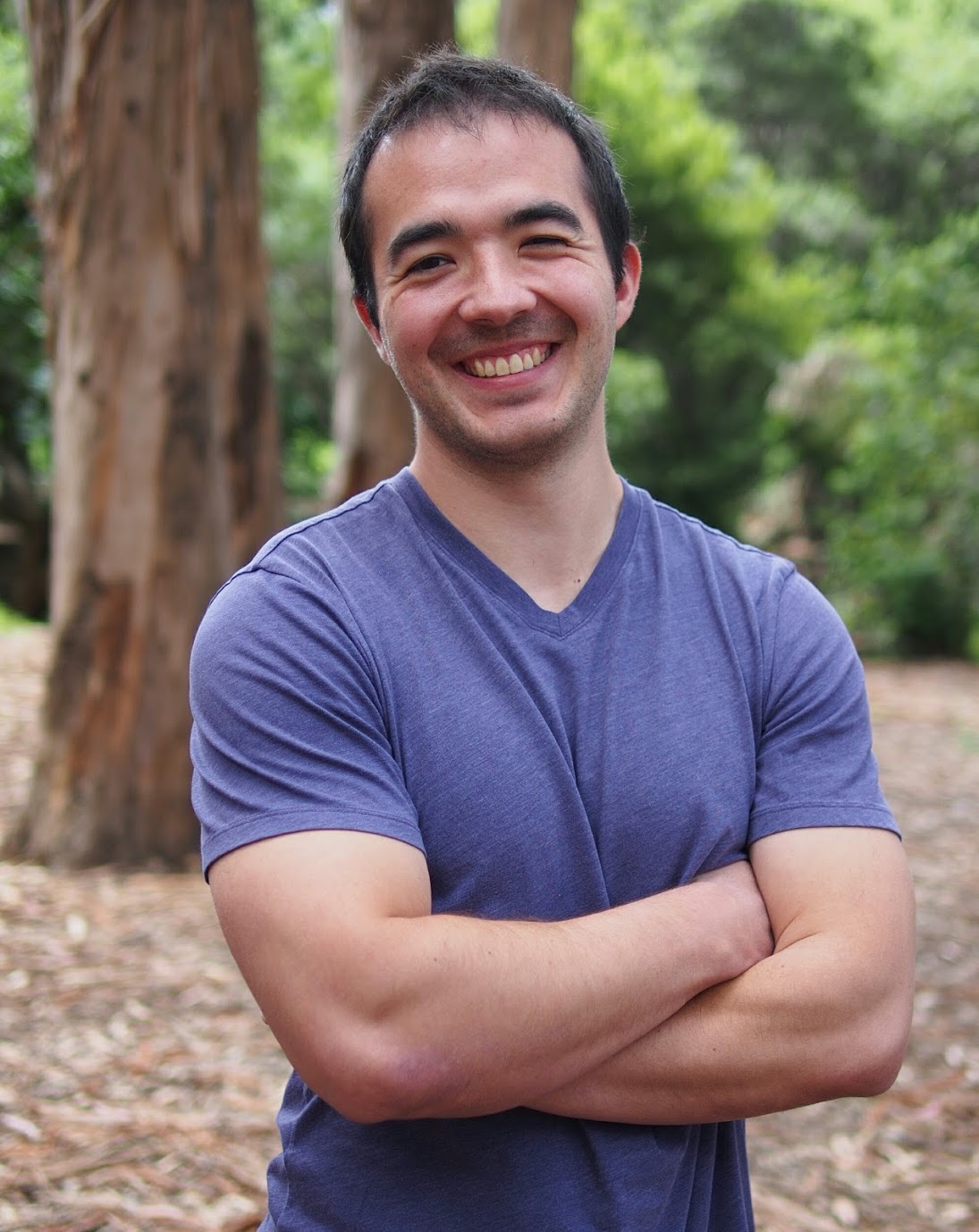 What do you think is the most interesting outcome of the study?

AN: Our data suggest that the two neuron types we studied, Martinotti and non-Martinotti cells, are specialized to perform different functions in sensory processing. We know that sensory processing involves integrating “bottom-up” sensory signals from the external world with “top-down” information, which carries the context and our expectations about what is going to happen. One idea we propose is that non-Martinotti cells could preferentially modulate the bottom-up signals, while Martinotti cells regulate top-down inputs. We weren’t able to test this hypothesis directly (and the truth is likely to be much more complicated than that) but I think it’s a good starting point for future work.

What question did this raise that you would like to see answered?

AN: It’s always important to ask how much your results will generalize. We did all the work in this study in the primary somatosensory cortex of the mouse, but we were really curious to know if these circuits are present in other parts of the brain. We were able to compare our transcriptomic data with similar datasets made available by the Allen Institute for other parts of the brain. We were excited to see that there are neurons in these other areas with gene expression profiles that were very similar to the ones we saw in our neurons. But very recently, another group posted a preprint that suggests that the analogous circuits in primary visual cortex exhibit some important differences from the circuits we described in primary somatosensory cortex. So the jury is still out on whether we discovered an important principle of neural circuits or whether I spent half my PhD characterizing an idiosyncrasy of this one part of the mouse brain.

How will this research advance our knowledge of how the brain works, and why is that important?

AN: One of the biggest problems neuroscientists face today is the lack of a comprehensive understanding of cell types in the brain. It’s rapidly becoming clear that many of the groups that we previously thought belonged to one cell type should actually be split up into multiple smaller groups. Martinotti and non-Martinotti cells have often been lumped together into the same group, but I think we’ve definitively shown that they are (at least) two distinct cell types with very different functions.