Our brains have the remarkable ability to guide us through a complex world full of uncertainty. Researchers at the Redwood Center aim to identify theoretical principles that can help to understand how the brain functions. The Center brings together mathematicians, physicists, biologists, computer scientists, and engineers in a unique collaborative environment. Together, this diverse group works to develop creative solutions for several unsolved puzzles in neuroscience.

Finding patterns in the world

Left: When presented with image samples from the external world, a network learns an efficient internal representation. Right: Different nodes in the network, reminiscent of neurons in the visual cortex, learn to respond to edge-like features of images.

We are born without any understanding of language. Gradually, over years, we somehow learn to comprehend speech and to organize a large number of words into sentences. This slow learning process infuses all aspects of our being: seeing, hearing, walking, riding a bike, and many others. Over time, each aspect of our knowledge becomes linked with many others. For example, we learn to associate a bicycle with certain sights, sounds, actions, and functions.

At the Redwood Center, scientists develop algorithms to mimic the basic elements of this learning process. Professor Bruno Olshausen, the Center’s director, developed one such algorithm known as sparse coding. When presented with training examples, a sparse coding network identifies recurring patterns in its input that can serve as a sensory “alphabet.” Olshausen first trained a network by presenting it with thousands of snippets from photographs of real scenes. As a result, it learned a large number of edge-like features of various lengths, widths, and orientations, each activating a different node of the network.

Strikingly, these edge-like features, when shown to an animal, induce strong responses in certain neurons of its visual cortex. Similarly, when trained on natural sounds, sparse coding networks learn features that are found to activate neurons in auditory brain regions. These results suggest that sparse coding may be a principle used by the brain in learning about its environment.

Following the promise of these initial studies, members of the Redwood are challenging these model networks with more complex problems. For example, while both trees and mountains can be viewed as a combination of edges, it is the global arrangement of these edges that sets the two scenes apart. In fact, most of our experiences exhibit this hierarchical organization – they show characteristic patterns at both small and large scales. The brain appears to mirror this organization too. Our visual cortex contains a hierarchy of areas that are found to respond to progressively larger and more complex features, such as shapes, textures, and human faces. Redwood scientists are investigating multi-layered networks to learn such hierarchies of structure in natural scenes.

Finding patterns in the brain 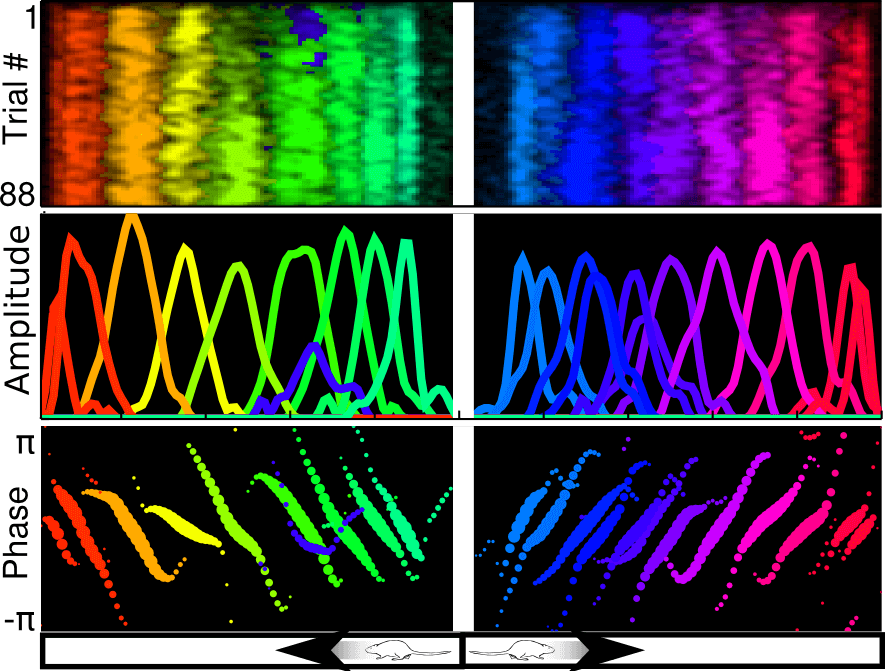 Electrical signals are recorded from the hippocampus of a moving rat as it runs back and forth on a linear track. Scientists found that at each point of the track, specific patterns of electrical activity emerge. In this figure, the activity of each pattern is rendered in a different color. Together, these patterns define a ‘map’ of the environment that specifies the rat’s current location.

The brain contains many billions of neurons that in coordination guide our behavior. Emerging technologies allow us to observe the patterns of activity produced by large groups of these brain cells. Yet neuroscientists still do not understand how these ensembles carry out cognitive, perceptual or motor functions. Collaborating with experimentalists, members of the Redwood Center are developing analytical tools to help identify the patterns in this coordinated neuronal activity and the messages embedded within them.

One measure of neuronal population activity that Redwood researchers are studying is local field potentials (LFPs). LFPs are generated by the synchronized activity of many thousands of brain cells. Scientists have long thought that LFPs lack the precision of single neurons, just like the roar of a crowd obscures the voices of individual people. However, researchers at Redwood have recently developed ways of recovering detailed information from LFPs recorded from the visual cortex and the hippocampus of animal subjects. These LFPs can exhibit precise spatio-temporal patterns in response to specific environmental conditions. For example, as a rat walks through its environment, different spatial patterns emerge in the LFPs of its hippocampus, and the scientists can use these patterns to determine the animal’s current location.

This finding is very useful in practice. An individual neuron is so small that detecting its signal can be difficult. So recording signals from groups of neurons allows experimentalists to more easily access information about the subject’s experiences.

Acting in the world

Babies learn about the world by babbling, playing, tinkering, and falling. In contrast, most neuroscientific theories of learning are based on passive processing of incoming sensory data. What is the role of active exploration in developing an understanding of the world?

Members of the Redwood are currently developing a theory for how organisms can build internal models of an unknown external environment. Professor Friedrich Sommer and graduate student Daniel Little hypothesize that the brain may be using an optimal strategy for interacting with the world – one that maximizes surprising sensory input given its current understanding of the environment. They suggest that by engaging in play, children may encounter unexpected experiences, giving them valuable insights about the nature of their world.

To complement this theory-based approach, other members of the center are studying strategies used by human subjects as they explore virtual-reality environments. By analyzing the tactics players employ, the scientists hope to understand how individuals learn about a new environment. The development of such theories is crucial for understanding the perception–action loop – that is, how perception feeds into action, and how actions in turn affect sensory input – which is fundamental to all intelligent organisms.

Researchers at the Redwood Center for Theoretical Neuroscience recognize that understanding the brain is a community effort. They meet daily to discuss scientific and personal accomplishments and every Thursday to discuss current literature that inspires them. The Center also hosts a weekly public seminar with leading experts from around the world. These seminars are recorded and posted online, free for anyone to view. Additionally, during the school year and the summers, the Center offers courses to train the next generation of neuroscientists.

A larger goal at Redwood is to foster greater interaction between theory and experiment. The Center has established an online repository hosting terabytes of high-quality electrophysiological data, recorded in leading experimental labs from around the world. Anyone can download them at crcns.org. “Providing open access to this experimental data is crucial for enabling theorists to test computational models of brain function,” says Director Olshausen. “The broad exploration of these datasets by many different communities could lead to fundamental new discoveries.”

Learn more about the Redwood Center for Theoretical Neuroscience on their website.