The promise of stem cells: Regeneration in the adult nervous system 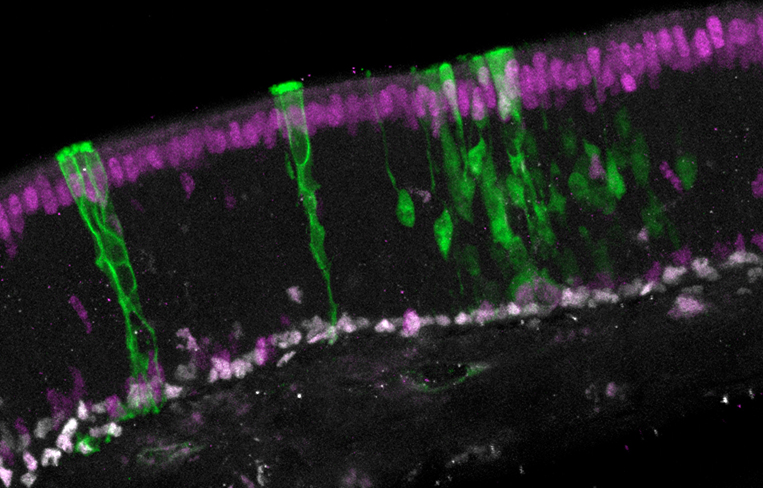 Injury to the brain or spinal cord is devastating. In these areas of the nervous system, the damage caused by trauma or stroke can only be partially recovered at best. In contrast, some neural tissues in the periphery can completely recover following injury, by regenerating the sensory neurons and other cell types that have been damaged. The olfactory epithelium, which lines the nasal cavity and is responsible for the sensation of odor, is one such neural tissue. Understanding what gives this tissue the capacity to regenerate and recover function is of major therapeutic interest.

The olfactory epithelium continuously turns over throughout the lifetime of an individual. The old cells die and a resident population of stem cells proliferates, integrates into the tissue, and differentiates to replace the dead cells. The olfactory epithelium can also regenerate following injury. Surprisingly, injury triggers the proliferation of a different source of stem cells to replace the injured tissue.

In a study recently published in Cell Stem Cell, the Ngai Lab tracked stem cells that were generated following injury to better understand how they are able to repair damaged tissues. The authors utilized sophisticated single-cell techniques to monitor changes in gene expression as the stem cells proliferated and differentiated into specific cell types. They found that injury activated a quiescent population of stem cells, which expressed genes that are specific to injury-induced regeneration.

These results describe the mechanisms used by stem cells in response to injury, and may provide insight into neurogenesis and repair in other neural tissues.

Levi Gadye: In our study, olfactory stem cells showed remarkable flexibility in the fates that their descendant cells took on, ranging from support cells (akin to glia) and neurons to renewed, bona fide reserve stem cells. Upon injury to the tissue, quiescent (resting) olfactory stem cells shift to an activated, intermediate state that is transient. We demonstrated that fate specification occurs as the cells transit through this state, and the activated stem cells either revert back to the quiescent stem cell fate (“round-trip”) or go on to differentiate. This intermediate state and the “round-trip” journey adds to a growing body of recent literature that has rekindled debates over what a stem cell really is and how they behave.

Prior to this study, we knew that olfactory stem cells were responsible for regeneration of the olfactory epithelium (OE), but we lacked tools for identifying the cell types that bridged quiescent stem cells with the more mature cell states. By comparing the expression of thousands of genes across many cells, we were able to re-order the cells according to their level of maturity, which cued us in to the genetic hallmarks of these previously undescribed activated stem cells, which were only present during the first 48 hours of regeneration. Future studies will now be able to more easily follow the course of these cells’ development and probe their regenerative capabilities even more deeply.

LG: In this study, we were able to measure and compare the expression of all genes in individual cells collected from the regenerating OE. To accomplish this, we first needed to cleanly isolate these cells. We used a strategy called lineage tracing to permanently mark reserve stem cells with a genetically-encoded fluorescent tracer, which all descendant cells would inherit. Then, all labeled cells were isolated from the tissue using fluorescence-activated cell sorting (FACS) and subjected to single-cell RNA sequencing.

We hit a surprising stumbling block early on, however: in a large number of our samples, very few cells were labeled, stymying the rest of the experiment. (Many a frustrated lunch break was taken to briefly ponder what had gone wrong. The world may never know; that’s biology for you.) We overcame this via repetition, and I still remember how happy I was each time I saw that I had a viable sample on the FACS sorter, even though it typically meant I had to eat a very late lunch.

With that said, this study was the result of a wide collaboration, and many of my colleagues handled the computational analyses that were required to make sense of the complex data I had helped to produce. Even from the sidelines (the lab bench), I know that this complementary half of the study was also quite the challenge. I’m very grateful to have been part of such a collaborative effort.

LG: The work of two leading stem cell biologists really framed my approach to this work: Elaine Fuchs (Rockefeller University) and Hans Clevers (Hubrecht University, in the Netherlands). There are too many papers to mention, but each of these scientists pioneered techniques for labeling and analyzing stem cells that have revolutionized how we study regenerative tissues, and what we currently think about stem cells in these tissues. Long story short, there’s more diversity in the behavior of stem cells than originally assumed.

I also must mention this paper, by Cole Trapnell, however, because it inspired me, and my colleagues, to invest our efforts in single-cell RNA sequencing. Trapnell’s paper demonstrated that single-cell RNA sequencing data could be used to reorder muscle cells according to their maturity, laying out a trajectory of changes to gene expression that corresponded to the development of muscle cells from stem cells. When I caught this paper in early 2014, I proposed loosely carrying out Trapnell’s experiment, which was done in cultured muscle cells, in the OE. The approach was very well-suited to our existing system for lineage tracing and John Ngai (my PI) and Russell Fletcher (another mentor and research scientist in our lab) both agreed to it. Three years later, the gamble paid off, resulting in two papers, including this one. (I was a second author on the earlier paper, which you can find here.)

LG: In 1913, Santiago Ramón y Cajal, the grandfather of modern neuroscience, wrote this of the brain:

“Once development was ended, the fonts of growth and regeneration of the axons and dendrites dried up irrevocably. In adult centers, the nerve paths are something fixed and immutable: everything may die, nothing may be regenerated. It is for the science of the future to change, if possible, this harsh decree.”

He was referring to a blatant fact of medicine: damage to many tissues, from skin to muscle to bone, isn’t always permanent, while damage to the brain often is. While this fact hasn’t fundamentally changed, its implications — that the brain is fully incapable of regeneration, and that new neurons are never born in adults — has been proven wrong over the course of the last 100 years.

Our research meticulously documents the process that allows new neurons to grow in the injured adult olfactory epithelium, the only sensory organ we have that can recover from severe damage. (Your eyes and your eardrums are far less privileged). Thirty years ago, the idea that we might someday develop a therapy to fix a brain damaged by a stroke or traumatic injury seemed ludicrous. Now, scientists are tackling this challenge from numerous angles. Our angle relies on this unique, regenerative neural tissue, and our research highlights many of the genetic systems that work in tandem to promote adult neurogenesis. Someday, perhaps this work will inform the invention of new therapies to repair the damaged brain.

LG: The stem cells of the olfactory epithelium do remarkable things in the nose, but they would be more valuable as a potential therapy if we knew how to grow them in petri dishes. If the right conditions were worked out for propagating these stem cells in vitro, scientists could grow millions of them from just a few thousand harvested from a patient’s nose, and then conceivably transplant them into the brain to replace damaged brain tissue. In other words, it would be great to see a research group finally tame adult olfactory stem cells for medical purposes.

LG: I wanted to put in some thanks here to my two co-first authors, Diya Das and Michael Sanchez, two graduate students in the Ngai lab who really helped make this paper shine.

Diya worked alongside Russell to analyze our single-cell RNA sequencing data and was invaluable for helping the biologists understand the statisticians, and vice versa, as this project grew — there were fourteen authors on this paper, divided between “wet” and “dry” labs. I frequently relied on Diya’s knack for making language and data visualizations clear as we drafted the paper together with John and Russell. Diya also helped me with the coding that I had to do to analyze some of my earlier data, which also went into this paper.

Michael graduated well before this paper was published (and in fact, I graduated six months before it was published), but he and I worked side by side during the first phase of the project, in which we learned how to accomplish single-cell RNA sequencing with our tissue. Michael and I spent countless hours doing dissections and immunohistochemistry for this project, and I often turned to him when I needed help dealing with finicky animals, antibodies, and microscopes.

It’s sad, to me, how much emphasis the scientific community still puts on individual accomplishment when science is so obviously a team effort, and I’m glad that my Ph.D culminated in a paper that so thoroughly reflects this reality.