By Natalie TerranovaOctober 20, 2021No Comments 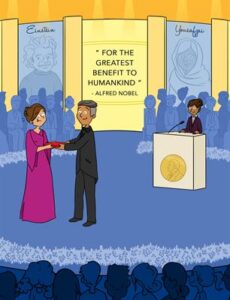 Illustration by Frontiers for Young Minds.

The world’s first scientific journal reviewed by kids, Frontiers for Young Minds, has launched The Nobel Collection — a series of articles written by Nobel Prize-winning scientists about their work. Frontiers for Young Minds was started in 2014 by Robert Knight, a professor of psychology at UC Berkeley and member of the Helen Wills Neuroscience Institute (HWNI).

The first five articles in the collection are by Nobel laureates Aaron Ciechanover, Roger D. Kornberg, Michael Levitt, May-Britt Moser, and Dan Shechtman. In each article, the laureates explain the research that earned them the Nobel Prize in language that kids can understand, and share their tips for young scientists. Like all articles submitted to Frontiers for Young Minds, they were reviewed by kids with the guidance of mentors, and are free for anyone to access. The Nobel Collection is edited by Knight and Idan Segev (Hebrew University of Jerusalem).

The Nobel Collection has already reached a large audience around the world, with 48 million views on social media and over 300,000 views of the articles in just the first few weeks after publication. Four of the articles are already in the top 10% of articles downloaded from the Frontier group of journals, which includes over 60 well-established scientific journals. According to Knight, at least a dozen other articles written by Nobel laureates are currently being prepared for publication in the collection, and will be released in batches of five every three months.

In addition to reading the articles, kids can also sign up to be reviewers for Frontiers for Young Minds. Scientists can volunteer with the journal, and many HWNI faculty, postdocs, and graduate students have contributed as authors, editors, and mentors. Please visit Frontiers for Young Minds for more information about the journal, how to participate, and to view the Nobel Collection.