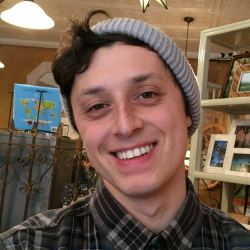 We are pleased to announce that Berkeley Neuroscience PhD student Jacob Ziontz has won a 2022 Young Investigator Award from the Alzheimer’s Association. The award is given to students or postdocs for advancing science in the field of Alzheimer’s and dementia.

Ziontz is a fourth year PhD candidate in the lab of Helen Wills Neuroscience Institute member William Jagust. The award was given in recognition of his research on the accumulation of Alzheimer’s disease-related tau pathology in humans. The study, which was published in The Journal of Neuroscience, identified a potential early marker for Alzheimer’s disease.

Ziontz was presented with the award at the 2022 Bay Area Alzheimer’s Researchers’ Symposium at Stanford University in August. He will receive $1000 and a one-year membership to the International Society to Advance Alzheimer’s Research and Treatment.