Modeling a neurodevelopmental disorder with human brain organoids: a new way to study conditions such as epilepsy and autism 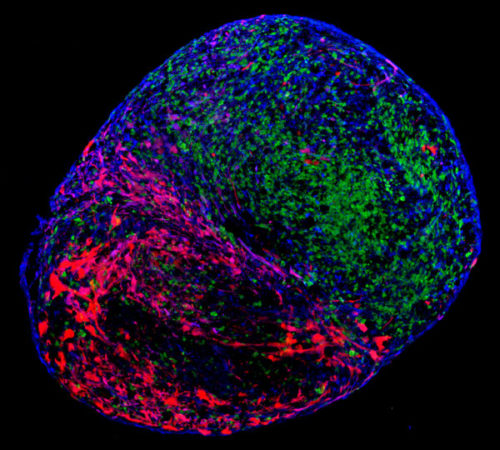 Human cortical spheroid showing normal neurons (green) and astrocytes (blue) generated from cells where only one copy of the TSC2 gene is inactivated; and enlarged, dysmorphic cells (red) from cells where both copies are inactivated, forming a “tuber-like” region. Credit: Bateup lab.

When brain development goes awry, the consequences can be devastating. The developmental disorder tuberous sclerosis complex (TSC) causes the formation of cortical tubers—disorganized regions of abnormal cells in the cerebral cortex of the brain—and often results in epilepsy, autism spectrum disorder, intellectual disability, and psychiatric disorders.

Berkeley Neuroscience faculty member Helen Bateup wants to understand the molecular and cellular mechanisms underlying TSC and other neurodevelopmental disorders. In a new study from Bateup’s lab, published in Nature Medicine, the researchers set out to understand why cortical tubers form—important because the tubers are associated with the seizures and cognitive impairment often seen in patients with TSC. Although it was known that TSC is caused by mutations in the TSC1 or TSC2 genes, scientists had been previously unable to replicate tubers in the lab because they do not appear in rodent models of TSC—likely due to differences in cortical development between rodents and humans.

To create a more accurate model of TSC, Bateup’s lab, in collaboration with Dirk Hockemeyer, used CRISPR-Cas9 gene editing technology to inactivate the TSC1 or TSC2 genes in human stem cells. Then, they used 3-D cultures to differentiate the cells into spherical organoids of developing human cortical tissue. Bateup says the advantage of 3-D cultures is that, “They are so much richer in terms of the cell to cell interactions and the complexity that you get. There’s something about developing in three dimensions that seems to be closer to what is happening normally.”

When both alleles of TSC1 or TSC2 were inactivated, Bateup says the cells generated in the organoids “look almost exactly like cells from patients’ tubers. They express all the same markers, they have the same altered morphology, and we see the same increased numbers of astrocytes compared to neurons. We were happy that we had a valid model that recapitulates the patient pathology—this is the first time this has been done for any type of focal cortical dysplasia.”

TSC1 and TSC2 inhibit activation of the kinase mTORC1, and accordingly, when the researchers inactivated those genes, the cells showed elevated mTORC1 signaling—similar to what is seen in tuber cells from patients. mTORC1 signaling is involved in a variety of cellular processes during development, and TSC is part of a larger group of neurodevelopmental disorders involving dysregulation of these pathways, called “mTOR-opathies,” which are a leading cause of childhood epilepsy.

Bateup says their most unexpected finding was related to mTORC1 signaling in the control organoids. They found that mTORC1 signaling was high in proliferating stem cells, but then became suppressed when neurons began differentiating. Bateup says, “The organoids that have mutations in TSC1 and 2 are not able to suppress mTORC1 signaling during neurogenesis, and we think that this interferes with neuronal differentiation and may directly promote astrocyte differentiation, which usually should occur later in development. We found this dynamic regulation of mTORC1 signaling during neuronal differentiation that hasn’t been reported in the literature before.” Therefore, not only did they gain insight into why astrocytes are produced at the expense of neurons in patient’s tubers, they also made an important discovery about how cell fate is normally regulated in the human cortex.

Additionally, this study shed light on an area of controversy in TSC research. Patients with TSC are heterozygous for the mutations—that is, they have one inactivated and one functional allele of TSC1 or TSC2. It was not previously known whether the cortical tubers could develop from cells with one functioning allele, or whether they required a “second-hit”—a spontaneous mutation within developing brain cells that inactivates the functional allele. 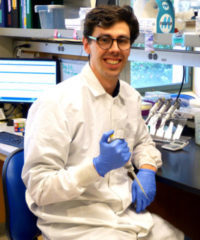 To test the second-hit model, the researchers created TSC2 heterozygous mutant cells, with a conditional mutation in the functional allele—giving them the ability to inactivate it when desired. They found that cells heterozygous for the mutation did not have characteristics of tuber cells unless the functional allele was inactivated—providing direct evidence for the second-hit model in TSC.

Bateup says, “A greater theme that this ties into is the idea of somatic mutations in general. There’s an emerging field suggesting that the brain, in particular, has a lot of these somatic mutations. Since human brain development requires a protracted period of neurogenesis, mutations can be acquired in some subset of your brain cells that really add to the complexity of the genome of neurons. In the worst case, it can lead to disease states.”

TSC can sometimes be diagnosed by ultrasound in utero based on heart abnormalities, making it theoretically possible to treat prenatally. This study showed that one proposed prenatal treatment—strong suppression of mTOR with the drug rapamycin—may actually be problematic, since it shifted the balance of neurons and astrocytes even in otherwise normal heterozygous cells. However, this human model provides a unique way to test potential treatments for TSC at different developmental time points, which may lead to the development of safe and effective treatments. Bateup says, “This model will help us address these things—there’s not really another system that you could use to answer those questions.”