Fisher wins 2021 Rennie Fund for the Study of Epilepsy

The Helen Wills Neuroscience Institute (HWNI) is pleased to announce that Yvette Fisher, incoming assistant professor of neurobiology, is the winner of the 2021 Rennie Fund for the Study of Epilepsy. Fisher will receive a one-year $46,000 award for the project described below. The Rennie Fund was created in 1962 as the result of a bequest from the Mary Elizabeth Rennie Trust to support research on epilepsy.

Read about the winning proposal: 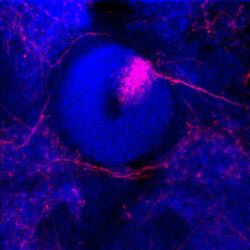 In order to think, large populations of neurons in our brain function collectively to represent and transform information. This requires that our brain achieve the non-trivial task of maintaining stable function of this highly interconnected and plastic system. It is widely believed that homoeostatic signaling systems stabilize neural function across our lifetime and impairment or maladaptation in these homeostatic processes are implicated in a wide range of neurological disorders, including epilepsy. However, it has been difficult to study how population-level activity is shaped by homeostatic signaling, due in part to the difficulty of measuring the activity of enough neurons simultaneously to fully capture the meaningful properties of a network. In recent years, the compass network in the fruit flies’ central brain has emerged as a canonical example of population-level coding (continuous attractor networks). Unlike the salt-and-pepper organization seen in many mammalian networks, the fly compass network has a beautiful and symmetric ring-shaped topology, comprised of individual compass neurons. These neurons tile sectors of the ring, carrying a sustained “bump” of neural activity that behaves like the needle of a compass, circling around as the fly turns. Importantly, signals from the full population can be measured as the fly behaves, and new genetic tools now allow us to selectively perturb an individual compass neuron. This sets the stage to investigate how this symmetric network responds to precise disruptions of one of its sub-elements. Drosophila is already a premier model system for studying homoeostatic signaling at the level of molecules and single synapses. Building on this strength, the goal of this project is to establish the compass network as a model for studying network-level homeostasis. This project has the potential to uncover novel principles about how homeostatic processes serve to maintain network-level dynamics and to identify signaling systems that participate in these processes as potential targets for epilepsy treatment.

About the Rennie Fund for the Study of Epilepsy

The Rennie Fund was created in 1962 as the result of a bequest from the Mary Elizabeth Rennie Trust to the UC Regents, to be used at their discretion for the study of epilepsy. It was later allocated to the UC Berkeley campus, and in 2017, the fund was transferred to the Helen Wills Neuroscience Institute.

Each year, up to three grants of $20-50K per proposal are awarded. Proposals can be directly related to epilepsy, or to closely related areas in neuroscience. Funds are available for one year and can be used to support research, development, conferences, and postdoc/graduate student support.

To learn more about the Rennie Fund for the Study of Epilepsy, visit the fund page.