A fundamental question in neuroscience is “How does the brain learn?” Berkeley Neuroscience labs are addressing this question across scales, from changes in the proteins embedded in neuronal membranes to large scale hemodynamic responses in the human brain, and throughout the life span, from the earliest skills animals must learn after birth to the diminished capacity to learn that occurs in old age. 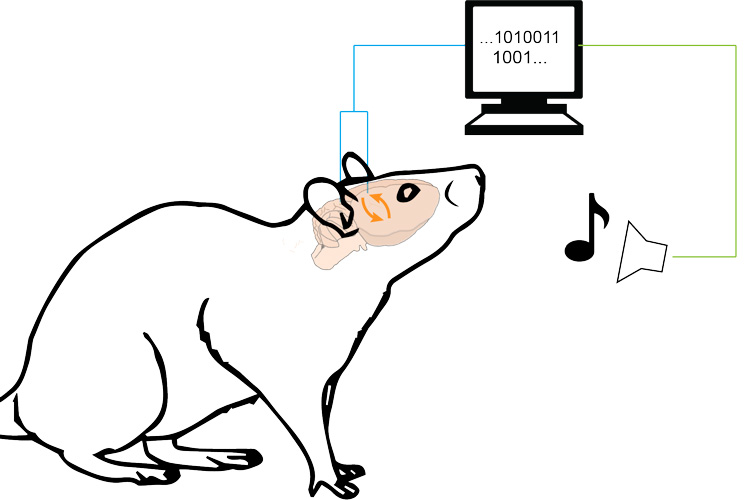 Areas of the brain that get input from the eyes can be hijacked to control something outside the brain, such as a computer that generates a tone. Yellow arrows represent feedback between the rat’s visual cortex and striatum, which is key to learning new tasks. Image by Ryan Neely.

The Carmena Lab uses brain-machine interfaces to study how the brain learns to use sensory feedback to control an external device, such as a neuroprosthetic limb. This type of learning is called abstract reinforcement learning, since the animal is learning a new thought action for a reward.

In a study recently published in Neuron by Neely et al., they introduced brain-machine interfaces, in the form of microwire electrode arrays, into the visual cortex of rodents. The electrodes detected the spiking activity of twenty neurons on average. Four neurons out of the twenty were chosen to control an audio tone. Increased spiking of two neurons moved the tone toward the rewarded frequency, while increased spiking of another two neurons moved the tone away from the rewarded frequency. A different set of four neurons was chosen for each training session. After an average of nine training sessions, the rodents learned how to rapidly and intentionally modulate the activity of the four chosen neurons in order to reach the rewarded frequency.

Ryan Neely: I think at first glance what seems to be most striking is that rats and mice can learn to control visual cortex activity to drive a brain-machine interface. For me though, I think the necessity of the striatum for this learning process is what I found most interesting. In the context of a lot of other excellent work, this result seems to suggest that the cortex-striatum projection is really a key component of how the cortex modifies its outputs in ways that benefit the animal.

RN: I think the most difficult part of the study was keeping the whole BMI system and associated equipment running smoothly during the training phases. There are a lot of interconnected parts, and everything had to work together seamlessly so that all of the animals were trained in a consistent way across many days without any interruptions.

RN: There was a lot of great work that I was inspired by- certainly the work of Dr. Aaron Koralek, a former HWNI PhD student in the Carmena Lab, and collaborators who pioneered the rodent BMI task and laid the foundation for what I did. Koralek also led the mouse effort for this paper from his current position as a postdoc in Rui Costa’s lab at the Champaulimaud Center in Lisbon. In addition I spent a lot of time reading and re-reading the work of Dr. Larry Swanson who influenced my thinking about how the brain might be described by general organizing principals.

RN: I hope that this work will provoke discussion about commonalities in cortical function and how cortical circuits are tuned. My adviser, Dr. Carmena, often conceptualizes that the whole brain is wired for action. You might imagine that the cortex is capable of many different “actions,” whether they be physical actions, cognitive actions, or perceptual actions. I think our work teases the notion that the learning process involved in a broad spectrum of mental or physical actions might be supported by a common sub-cortical circuit involving the basal ganglia- at least in an operant learning context.

RN: Yes! One question that has always lingered in my mind is how the brain is able to identify a randomly selected handful of cells out of millions (4 at a time, in our case), and modify their behavior to solve a BMI task. I think someone with a different approach could find a fascinating answer to this question.