By Natalie TerranovaNovember 16, 2021No Comments 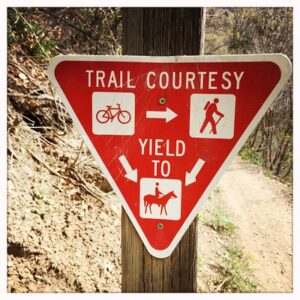 The study shows how relative value — how different items are ranked with respect to each other — is mapped in the brain. Photo: “Trail signage” by Bryan Jones*.

When you make a decision, such as choosing what kind of cereal to buy, your brain weighs the relative value of your options. You might consider taste, nutrition, and price, and then rank the candidates accordingly before making a selection. Every day we make decisions based on the value of different choices compared to each other, but how does our brain encode these complex relationships?

A new study from UC Berkeley scientists has found that in monkeys, relative value is mapped in the same brain structure — the hippocampus — that maps spatial location. The study, published in the journal Cell, is the first to show on a neuronal level that abstract relationships are encoded similarly to physical space in the hippocampus, supporting the idea that the hippocampus constructs general “cognitive maps” and not just spatial ones.

The hippocampus has long been known to serve as kind of a GPS in the brain, helping animals navigate their physical environment. Hippocampal neurons called place cells fire when a rat is in a particular location within a maze, acting like a “you are here” arrow on a map, according to the study’s senior author, Joni Wallis.

Wallis is a professor of psychology and member of the Helen Wills Neuroscience Institute at UC Berkeley. She says that although much of the research on the hippocampus has been focused on place cells in rodents, findings in humans have long suggested that the hippocampus can encode much more than location. Damage to the hippocampus can cause a type of amnesia where people can’t form new memories. This observation led scientists to propose that the hippocampus encodes cognitive maps, of which spatial maps are just one component.

“A cognitive map [is] a map of all of the relationships in our environment,” Wallis says. “All of those relationships essentially end up embodying a memory, tying together all of the individual sensory elements of a particular event.”

Wallis and lead author Eric Knudsen, a postdoctoral fellow in Wallis’ lab, bridged this gap by using macaque monkeys. Monkeys can perform more complex cognitive tasks than rodents, and their hippocampal anatomy is also more similar to humans. Primates (including monkeys and humans) have a greatly expanded anterior hippocampus compared to rodents, reflecting their similarly expanded frontal lobe. The anterior hippocampus connects to the frontal lobe, a brain region that carries out high-level cognitive functions such as planning, reasoning, and decision-making.

Wallis says that the anterior hippocampus is “dysfunctional in a lot of neuropsychiatric disease [such as] mood disorders, anxiety disorders, and schizophrenia. The homology between monkeys and humans is really good with respect to this area, and it isn’t with rodents.”

In the study, the researchers recorded the electrical activity of hundreds of individual neurons in the anterior hippocampus while the monkeys performed a cognitive task. They were shown pairs of pictures, out of a total of three pictures, and each picture was associated with a certain probability of earning a juice reward. The monkeys were trained to choose between the two pictures presented, selecting the one most likely to give them a sip of juice. Then the researchers gradually changed the reward probability associated with each of the three pictures.

“It’s basically like a slot machine. The animal is faced with a choice between different ‘gambles’ — pictures that have a probability of getting them a reward,” Wallis says. “Those gambles are changing across the course of the session, but they’re only changing slowly, so the animal can figure out which is the best slot machine.”

By shifting the reward probability of the three pictures, the researchers created a three-dimensional “value space” that the monkeys traversed mentally, similar to how animals move through physical space. Value space can be visualized as a 3D graph, with the three axes representing the value of the three pictures. The scientists controlled the monkey’s path through the value space by how they changed the reward probabilities, just as a maze is used to create a specific path through physical space.

They found many neurons in the anterior hippocampus that consistently fired when the monkeys were in a precise location within the value space. This is similar to how place cells fire when an animal is in a particular location. These “value place cells” also exhibited other characteristics similar to spatial place cells, such as firing more strongly when the paths were traveled in one direction, and the ability to remap when new pictures were introduced. These results show for the first time that hippocampal neurons can encode location within value space in a similar way to how place cells encode physical location, supporting the idea that the hippocampus can construct cognitive maps of completely abstract relationships.

Wallis says these findings suggest that the hippocampus encodes not just spatial relationships, but “any kind of relationship that you can imagine” and that it may explain the mechanisms underlying amnesia due to hippocampal damage. She adds that this study supports the idea that “the hippocampus is essentially this structure that encodes relationships. It has a relational code. And it doesn’t care [what the information is]; just anything that can be expressed in that relational code — it will code it.”

Now that they have identified this map of relative value, Wallis says her next steps are to investigate how it can be used to actually guide decisions, and how cognitive maps in the hippocampus may also relate to learning.