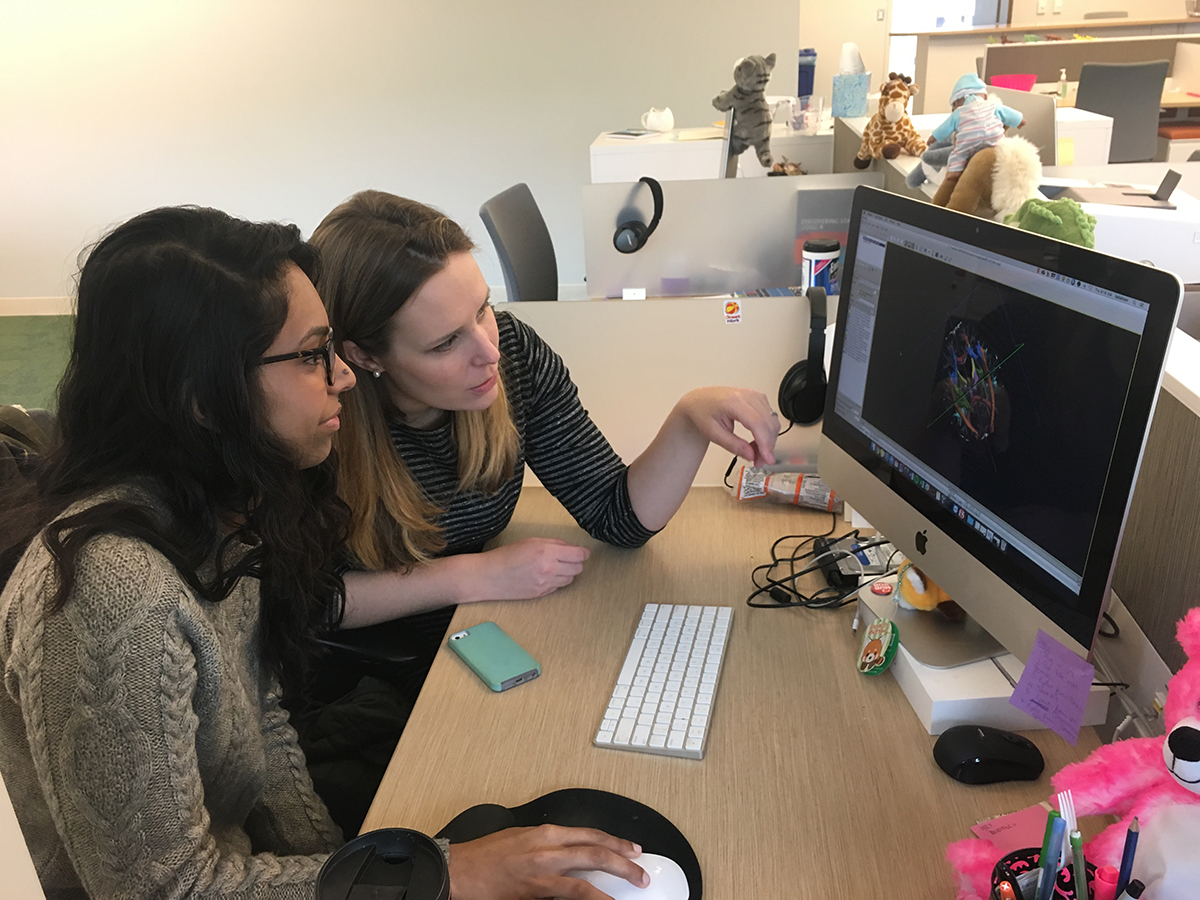 Allyson Mackey (right) working in her lab at UPenn.

Allyson Mackey wants to understand how the brain changes during development and learning, a question that has interested her since she was babysitting and working in a toy store in her hometown of Denver, Colorado. As an undergraduate at Stanford University, Mackey took on a neuroimaging project and was hooked. In 2007 she joined the Berkeley Neuroscience PhD Program so that she could work in Silvia Bunge’s Lab. Mackey’s PhD studies in the Bunge lab showed how intensive training can improve reasoning ability and change brain structure and connectivity (Journal of Neuroscience 2013). As a postdoc in John Gabrieli’s Lab at MIT, she identified neuroanatomical differences in adolescents from higher income versus lower income groups (Psychological Science 2015).

Mackey is currently Assistant Professor of Psychology at the University of Pennsylvania, where her research group uses neuroimaging to study human brain plasticity during learning. In particular, Mackey is interested in the influence of socioeconomic status on the developing brain, and academic interventions that may reduce the income achievement gap.

In addition to running a lab, Mackey regularly participates in neuroscience outreach to children, parents, and teachers, a practice that began as a PhD student. At UC Berkeley Mackey co-organized Mind and Brain Night, where grad students created booths about their research to share with the community.

Reflecting on her time as a student in the Berkeley Neuroscience PhD Program, Mackey says it was a good social environment, and that she made great friends who are now great colleagues. She is also grateful for the teaching training and practice she received at UC Berkeley, where she taught classes in neuroanatomy with Marian Diamond.

The interview below has been edited for brevity.

Georgeann Sack: Tell me a bit about your background story. What sparked your interest in neuroscience?

Allyson P. Mackey: I went to Stanford with the plan to study evolutionary biology. I had gotten very interested in lemurs in Madagascar during high school. Once I got to college I started taking classes in biology and there were two research opportunities for the summer between my sophomore and junior year. I could count butterflies in Colorado, and pursue this evolution and ecology direction, or I could work in a neuroimaging lab and study child brain development, specifically in kids with disorders like autism and Fragile X. That ended up being a really easy choice for me.

Through my project in Allan Reiss’s lab I came across research in educational neuroscience – work trying to understand individual differences in academic performance, and some early work on socioeconomic status and brain development. I started to realize that neuroscience tools could be applied to these questions that I had had in the back of my mind about educational inequalities I had witnessed as I was growing up.

GS: What led you to choose UC Berkeley?

APM: I was looking for labs that did developmental neuroimaging and there weren’t many at the time. I was drawn to Silvia’s research and made her this pitch that I was interested in socioeconomic status and she was open to the idea.

APM: Yeah, it was a huge opportunity, the first of several crazy ideas I pitched to her. Also, when I visited I felt like faculty respected students and treated them as their intellectual equals in a way that I found very inspiring. 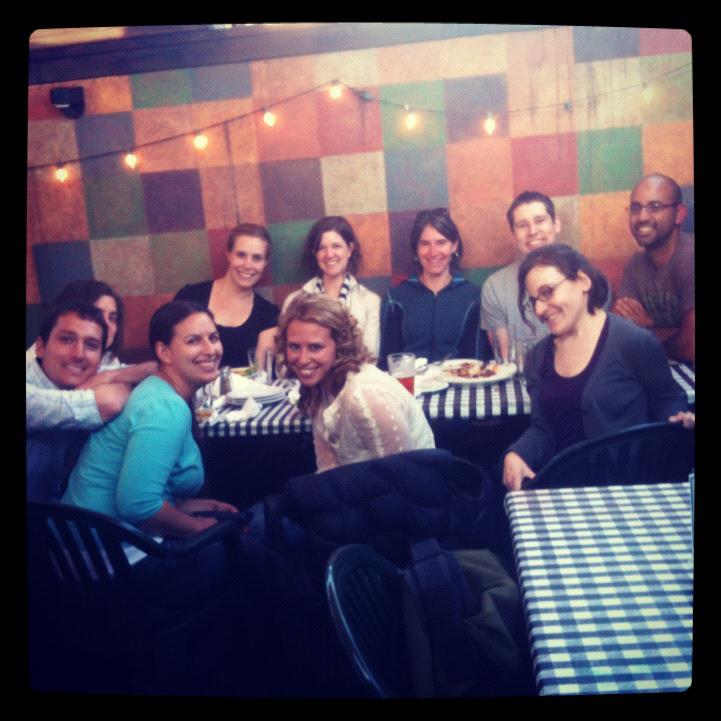 Mackey after her exit talk at Triple Rock Brewery in Berkeley.

APM: Silvia’s lab was interested in reasoning, or the ability to solve novel problems. My first project was on whether this ability could be taught, because for a long time it was conceptualized as a highly heritable trait and not discussed in the context of education. We picked commercially available games that involve reasoning and processes like relational integration, and worked in a school in Oakland. We found that after just eight weeks of playing these games the kids showed a pretty big IQ change – an improvement of about 30% or about 10 points in IQ.

I was really interested in how the brain changes to support these kinds of reasoning games, but neuroimaging of child intervention studies is really challenging. I actually booked all of the kids to come in to be scanned before the intervention started, and that weekend the scanner happened to go down.

As I was waiting for a kid in my study to be picked up, his dad was shot on his way to the school. So I had this panic – why am I doing cognitive interventions when this kid’s life can change so drastically? I got inspired to think about doing a law degree at the same time in order to be better poised to do policy work. I decided I should take the LSAT.

I started studying for the LSAT and got interested in the test in and of itself since I had been doing all this work on reasoning and relational integration and that was exactly what the LSAT asked people to do. I thought it would be interesting to see how people’s brains change as they study for a reasoning test. It is very motivating, because the score you get determines where you can get into law school, and people spend over a hundred hours over three months learning to reason better.

We did MRI resting state, diffusion, and task-based imaging before and after and found strengthened connectivity in networks that support reasoning. In these healthy young adults, we were able to see that these networks were not intractable to educational interventions, they actually do change as people learn to reason better.

GS: What does that actually look like in the scan – you say strengthened connectivity – how do you see that?

APM: We looked at it two ways. We looked at resting state imaging. So you just look at blood oxygen fluctuations over time. Two gray matter areas that have highly correlated blood oxygen fluctuations tend to be in the same network. So if you look at left and right motor cortex, or left and right visual cortex, you see that those fluctuations are tightly correlated. You also see that in the frontoparietal network as well, and what we were looking at was the change in the strength of those correlations.

We think it is analogous to ‘cells that wire together fire together’ – brain regions that fluctuate in sync must have a link. [laughter] We don’t have a good rhyme for that yet.

GS: That was pretty good!

GS: Did you indeed take your LSAT?

APM: I didn’t. I got too excited about science again. I think I was wrong that policy would be any faster. I think that was overly optimistic. I am still interested in policy. I just came back from a meeting on neuroscience and socioeconomic status and policy implications. The field is moving in that direction but it is very slow.

GS: Do you do any outreach to people who make policy decisions?

APM: I haven’t had a clear policy recommendation yet. I do outreach about neuroscience and about brain plasticity but mostly for children at museums and schools, and for parents and teachers too.

Talking to policy makers last week, they understand now that there are strong correlations between socioeconomic status and brain structure and that there is good evidence that the brain is plastic into adulthood. But there is little evidence that puts those pieces together and says, ok this is the intervention that helps kids in poverty and this is how their brains change as a result of that intervention. Which was something I was trying to do in 2007 and it is sad that it really hasn’t been done much yet but I think that is a high priority for the future.

GS: Did you have any major realizations about research or life while you were at Berkeley that you have carried with you as you went on?

APM: I learned that people are the most important part of science. For science to be fun, you have to be working with people that you like and respect. I’m still, as an independent investigator now, collaborating with my graduate school roommate, Emily Cooper, and with Kirstie Whitaker, who was in the Bunge lab at the same time as I was. I made great friends who are now great colleagues. 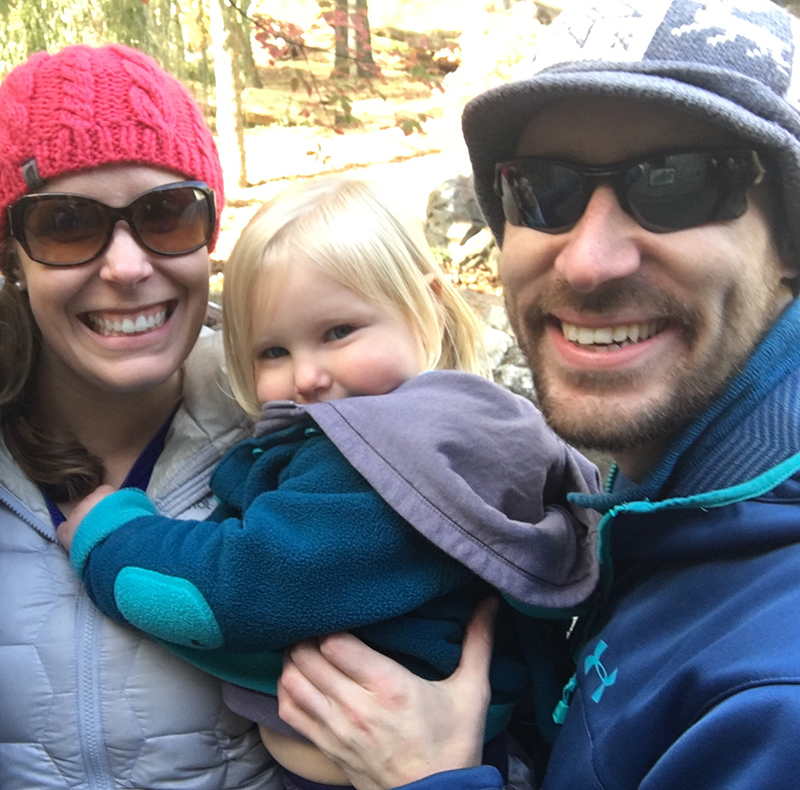 Mackey with her daughter and husband.

APM: After graduate school, I got married and went to South America for three months, and then started a postdoc at MIT with John Gabrieli to work more on the effect of early life adversity on brain development and to continue some of the translational work on intervention development. I was there two years and then went on the market. I decided to come to Penn because I have so many great collaborations here. Again, this is a theme for me, my highest priority. Several people here are working on similar topics. I deferred for a year because I was pregnant during my job search and started as Assistant Professor at Penn in July 2016.

GS: Tell me more about the research you do in your lab now.

APM: We are interested in individual differences in brain development and plasticity. Most of the questions in the lab take the form of how does the environment influence the brain and how does the brain support the development of cognition. We have a number of interesting studies going on. Some of which use data we collect in-house and some of which are big data projects. There is an incredibly rich set of developmental data now that is available and that is just growing. With these big data sets we can ask better questions about how specific environmental influences shape the developing brain.

GS: What is your favorite thing about your job as a professor?

APM: Hanging out with my lab. I am so fortunate to have great people who are funny and smart and inspirational.

GS: What publication are you most proud of?

APM: Maybe my Journal of Neuroscience paper from Berkeley. At the time I didn’t feel like it was a very unique idea to go after how these networks change with education, but it really hasn’t been done much since, and I think there is still a pretty heated ongoing debate about whether these networks can change with experience or if there is just measurement noise.